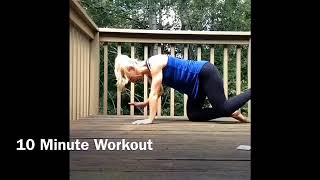 It's sometimes hard to find the time or equipment to get a good workout into your day. However, not much is needed in order to properly work out your body. Follow this quick 10 minute workout when time is limited or you are traveling away from your gym. 1. Squats: Make sure to press through your heels and extend through your back side. Complete 20 repetitions of 2 sets 2. Arm Star Pattern: Assume the push up position. While keeping your stomach tight, rotate your body an

Why Physical Therapists Can't Be Replaced with AI

Computers are becoming smarter. Just think about a few years back - someone would have said driver-less cars were impossible. But it's coming! Technology and computer artificial intelligence (AI) is growing, and in some cases, faster than humans can keep their jobs. A recent January 2017 report by McKensey Global Institute, stated that roughly half of today's workforce could be automated by 2055. Until now, it was thought that the healthcare field was safe from AI. But e

What Makes My PT Methods Different

#TBT: 3 Exercises Every Snowboarder Should Complete

What is "Cupping" and all the Hype About?

Is My Physical Therapist Good?

Why Everyone Should Exercise this ONE Muscle!

My Four Circles of Health

3 Ways to Motivate Yourself